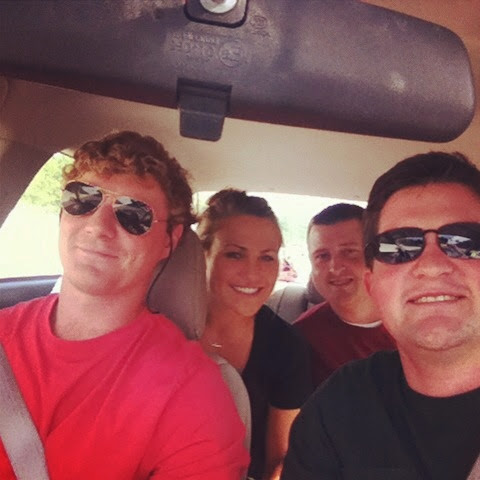 Friday morning we left at 6:30 for a wedding in Louisville, Kentucky. I didn’t get to run that morning because it was too dark to run my usual road route by my house. I don’t know what I will do in the winter when the sun isn’t even up until 7.
Any suggestions?! (Other than the dread mill)
So my plan is to run at 2:30 when we get to the hotel. Which means I’ll be a little cramped for time. I have pretty much decided that you can look pretty and curl your hair and such or you can be a runner. There is just rarely enough time for both. I choose running!
The wedding is one if JT’s close friends so I was the only girl for the 6 hour trip which meant a lot of sports talk. It also meant Waffle House at lunch after breakfast at Jacks. Needless to say I ate apples and protein shakes in the car and skipped the fine dining the boys chose. I really needed some female backup! Side note: just avoid the Waffle House in Elizabethtown, Kentucky–It was one of the grossest restaurants I’ve seen! 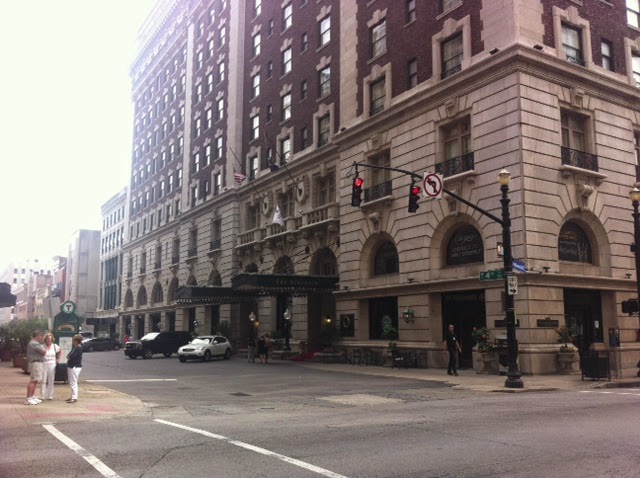 Once we arrived at our beautiful hotel, The Seelbach, I asked the concierge where would be a good place to run. He told me to take a left out of the hotel and I will run into the river which has a riverwalk along it where lots of people run. So I took a left, and then another one and about a mile in, I realized I was not going to find the river without getting kidnapped. There was a large group of people on the sidewalk outside of their apartment complex so I decided to just turn around. Good decision, too! As I got closer to the hotel and felt relieved, I noticed the 4th Street Live entertainment area and decided to turn down that street. At the end of the street, I began to see signs of the river and realized I took too many lefts the first time. 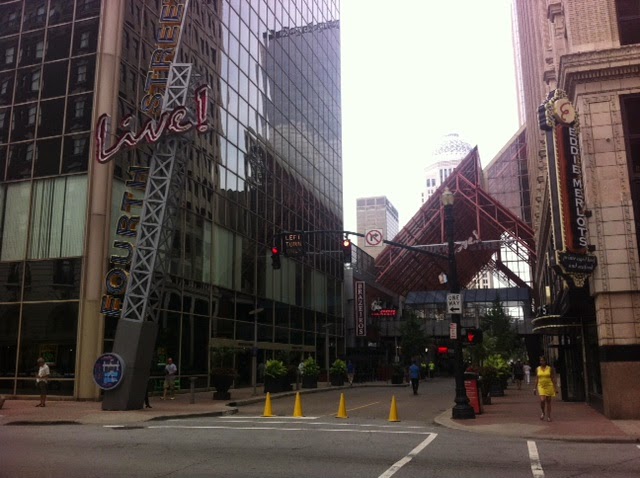 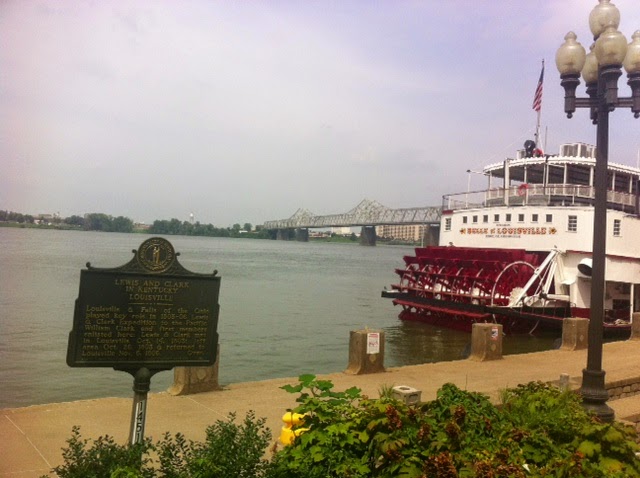 Another treat was the Ironman Competition that was taking place that Sunday so, naturally, there were athletes everywhere!

That night, we had drinks at the Seelbach bar before heading out. I had the signature Seelbach drink which had hints of orange mixed with champagne and bitters; a good choice that Cindy and I repeated the next night.

Then, we went to the  church for the rehearsal and then took a cab to O’Shea’s Irish Pub for the rehearsal dinner. The church was absolutely stunning and made me wish I was catholic to have a wedding in such a beautiful place. 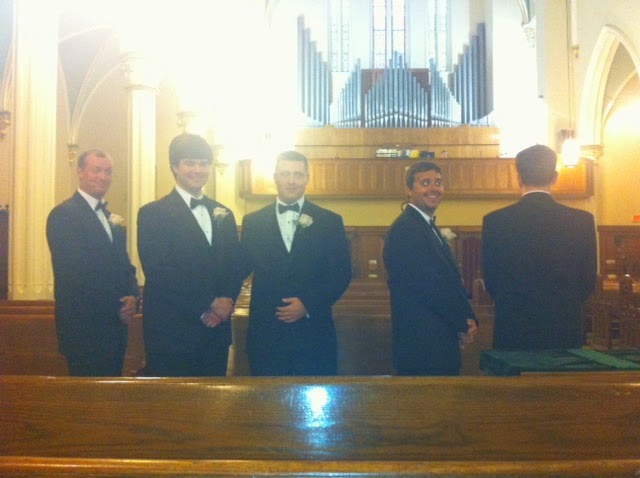 For the rehearsal dinner, the upstairs of O’Shea’s was rented out and it made a perfect atmosphere for a fun night with friends. A quick stop by 4th Street Live later and we were home. There was a $5 cover at PBR, an upstairs country bar, at 4th street if you are interested in going.

Saturday, I met Alba (new friend who came with one of the groom’s friends) for a quick 3 mile run before the day got started. It is so rewarding to run and explore new places on vacation. By that afternoon, I practically knew my way around the city. Which, is remarkable for me because I am terrible with directions! I also got to see them setting up and picking up packets for the Ironman.

That night we went to the wedding at the church and everyone involved was absolutely beautiful! You could really tell Chad and Abby are in love! They even seemed to put each other at ease. They are a fun couple! 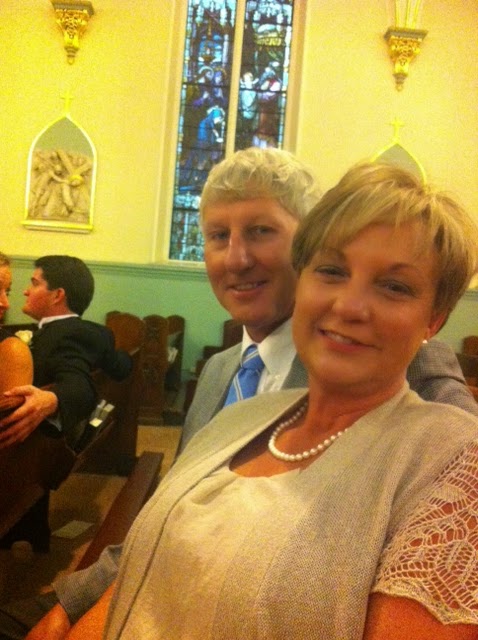 The reception followed at The Gillespie, an old bank, which was set up so lovely! I especially love the long table for the bridal party. The food was wonderful as well! Then, dancing and out to 4th Street Live one last time. 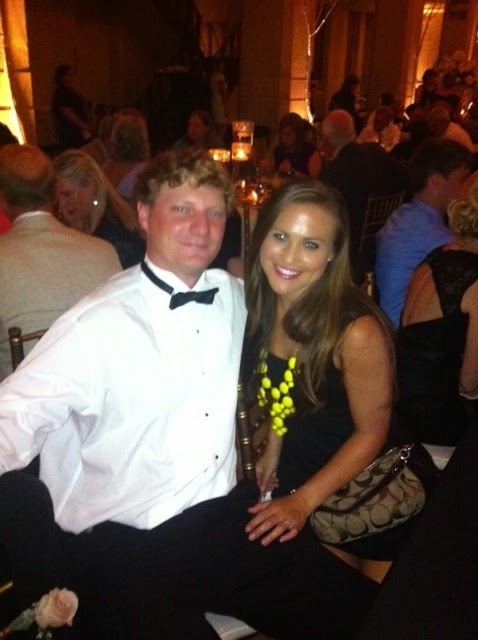 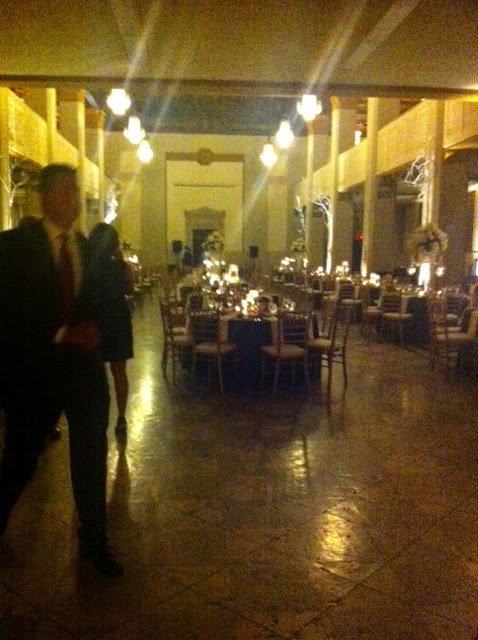 The next morning I was supposed to meet Cindy to watch the Ironman begin at 7:30 but I was definitely late. At 8:00 she called to let me know she was in the lobby so I jumped and ran to meet her. She had grabbed Frankie at that point so the three of us headed to the competition. We got there after about a 20 minute walk and saw the swimmers who were just under the 2 hour mark. It was really inspirational to see people working so hard in a competition! I really have to practice swimming so that hopefully one day I can do it! We saw the oldest competitor get out of the water at 77 years old! 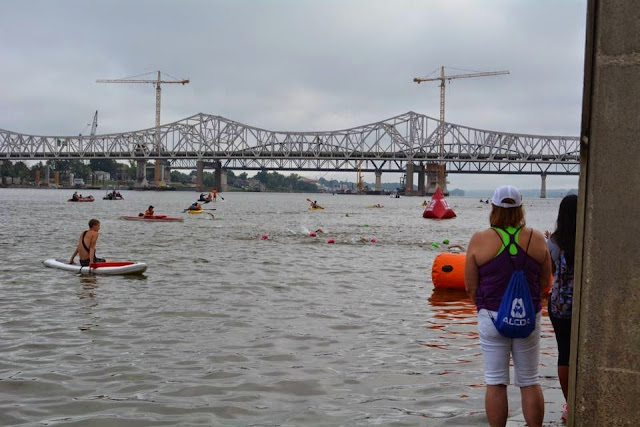 Louisville proved to be a fun town full of things to do for entertainment and rich history. I really enjoyed spending the weekend running around the city and then dressing up to celebrate love! I will definitely be back. After all, I still need to see Churchill Downs, right Cindy?!
What do you love to do in Louisville?

Starting back to school: Five tips for a healthy school year